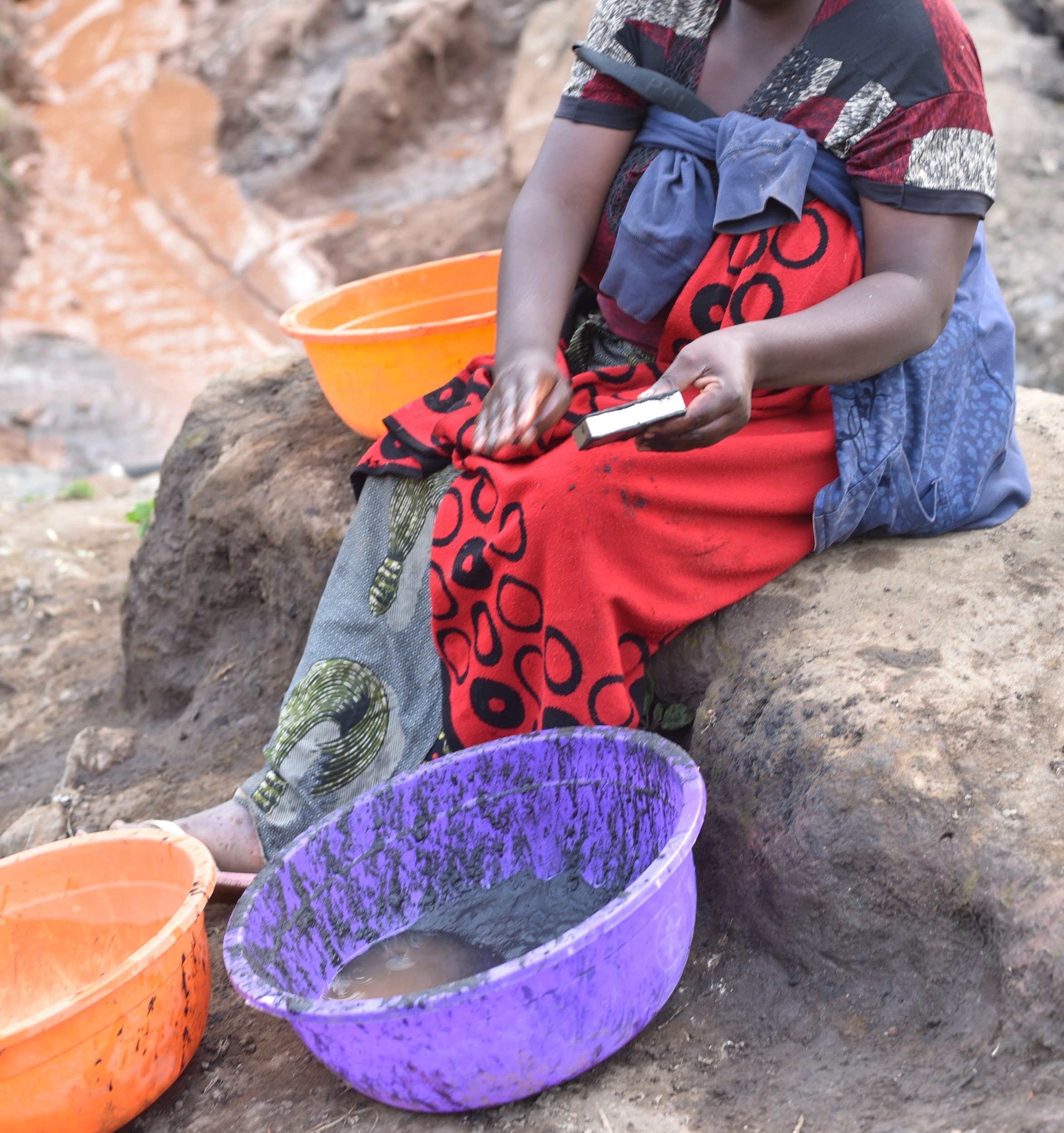 (This article is available in both English and French. Scroll down for the French translation)

Clémentine is a 23-year-old coltan miner and mother of three, who dropped out of high school to get married.[1] A few years ago a friend invited her to try out mine work, teaching her how to mine. Her husband, who is also a miner, gave her a small loan of $300 USD to get started in washing, separating and trading of coltan. He started mining when he was 15, saving enough money and working his way up from digging work to trading work – which is more lucrative and less physically demanding. They live two houses down from Clémentine’s mother and younger siblings, a 15 minute walk from a small mine site in a creek bed where she works in Masisi Territory in North Kivu province of the eastern Democratic Republic of the Congo (hereafter Congo or DRC). Clémentine and her husband work as a team and sell up to 50Kgs of coltan, profiting $30-50 USD over the course of a week.

Most people have probably come across a depressing article of some kind about human rights abuses, child labour or – so called – ‘conflict minerals’ fueling war in eastern DRC, as miners work to extract the mineral necessary for your cell phone battery. These unidimensional portrayals of women, mining and the DRC more broadly, have created problematic dominant narratives of Congolese women as victims and the mining industry as solely exploitative. While conducting three months of fieldwork in artisanal coltan mines in Masisi from July – October 2019 for my master’s degree at the University of Cape Town, several intersecting forms of exclusions were vividly present for women, primarily based on socio-economic status and gender. However, women employed creative strategies to overcome these exclusions and maintain work in mining. In contrast to the bleak news article you have read or documentary you have seen about mineral extraction in eastern DRC, this article seeks to push back on these dominant narratives about mining in the region especially as it pertains to women, by showing how women navigate the complexity of mine work. I will begin by briefly situating the mineral and the means, followed by a description of women’s exclusions and then discuss how women overcome these exclusions.

Broadly speaking, mining is historically considered male-dominated and a highly masculine industry. However, mining in the region is a major economic driver and women are very active in mine work in the DRC. The World Bank estimates that artisanal and small-scale mining (ASM) directly employs two million Congolese, of which 50% or one million are women. When you consider the industry’s dependents (the number of family members supported by each miner), artisanal mining supports 10 million people, about 16% of the national population.[2] Not only are women active in mining, they also seek mine work and move to mine communities.[3]

Coltan, the short form for columbite-tantalite which derives tantalum,  is necessary for a wide range of metal products including jet engines, electric cars, pacemakers and hearing aids; but is more commonly  known for its use in all modern digital technologies like cell phone and laptop batteries. The extraction and processing of coltan is labour intensive, so it lends well to artisanal extraction or what is essentially ‘hand mining’ and involves at least 6-8 steps from extraction to export. First it is dug out of muddy creek beds, washed, separated and refined in large open pit mines to a fine black powder, then transported to export houses in the provincial capital Goma. From there, after further industrial refinement and once accumulated into large quantities, the mineral travels overland by truck to ports in Dar es Salam and Mombasa for shipment to Malaysia, Thailand and China for smelting in the fabrication of various tec components. At this point consumer companies, like Apple and IBM, buy the components already manufactured, so they can assemble the device you’re using to read this article.

Women are involved at every step of this process but as the income earning potential increases, women’s participation decreases. A lack of access to credit or adequate financial capital keeps women in the least financially viable mine tasks, such as washing and separating work. In contrast to an industrial mine setting where employees are salaried, each miner works for themselves with their own capital to dig and trade minerals, so women are significantly disadvantaged by not having money to invest in upfront trade. In addition, gendered social norms surrounding masculinity and femininity exclude women from more lucrative mine tasks. In an interview with a woman who buys, refines and resells small quantities of coltan, she told me she didn’t conduct digging work because “it was a man’s job.” Her statement reflects how women’s engagement in mine work is highly associated to and restricted by localized social norms surrounding ‘men’s work’ vs ‘women’s work’. Of course, the exclusion of women from digging work is not actually because women lack the physical strength to do so but rather emerges as a way to exclude women from mine work based on social categorizations and restrictions. As a matter of fact, when I engaged in all the mine techniques I found the washing and refinement work to be much more physically uncomfortable and difficult then digging work. These two combined factors further contributed to women’s exclusion from distinct physical spaces at the mine sites, often resulting in a vivid and symbolic separation of the labour force based on gender, with women on one side of the creek bed and men on the other.

Lastly, women who work with babies are often chased out of mine sites by authorities since ‘children’ are not legally permitted in mine sites. Since women are the primary childcare providers and childcare services do not exist in this context, the need to bring babies to work is common and ends up excluding women from mine work in order to compensate for the child. However, there is actually no proven health risk associated with coltan extraction, so health considerations for the child are unfounded.[4]

In response, women have engaged in highly creative and resilient strategies to overcome these exclusions. At one mine site, women had organized into a group of 20, with elections by secret ballot for the position of President, Vice-President and Treasure in order to create their own credit system and conflict resolution mechanism for disputes at the mine sites. In that particular case study, women directly addressed their in-access to capital by creating their own system to access small loans and enhance their financial capacity. In this expression of gendered solidarity women had a way to address their systemic disadvantage and foster a form of counter-power to financial exclusion. In addition, in response to the spatial exclusion of women from the physical mine site, a female miner shared how she managed to hire other miners (male of course) to work on her behalf, circumventing her exclusion.  Lastly, at one site women had a secret alert system amongst themselves used to protect each other when working with babies. Often signaling and calling up to each other when authorities would approach to punish women for mining with babies, women worked together to protect each other. All of these instances demonstrate how women creatively maintain their presence in mine work, despite exclusions based on socio-economic status and gender, fostering collective and individual strategies to benefit from mining capitalism.

While this is not to say women do not face specific vulnerabilities and challenges, what my masters research reiterated is that women do not passively accept their exclusion but actively address inequalities. The small everyday acts and strategies highlighted above, demonstrate how women contribute to social transformation within their work environments, despite overwhelming odds. In this way, women miners hold multi-layered positionalities as marginalized labourers but active agents in mine work. In navigating this complex web of exclusions, women employ creative strategies to maintain their presence in the industry, while further addressing and shifting structural inequalities in the industry. As Clémentine said to me, “I changed my strategy, even though I was chased out.” Words to carry us all forward into and beyond women’s month.

[1] Pseudonyms are used in this article to protect the identity of research participants. 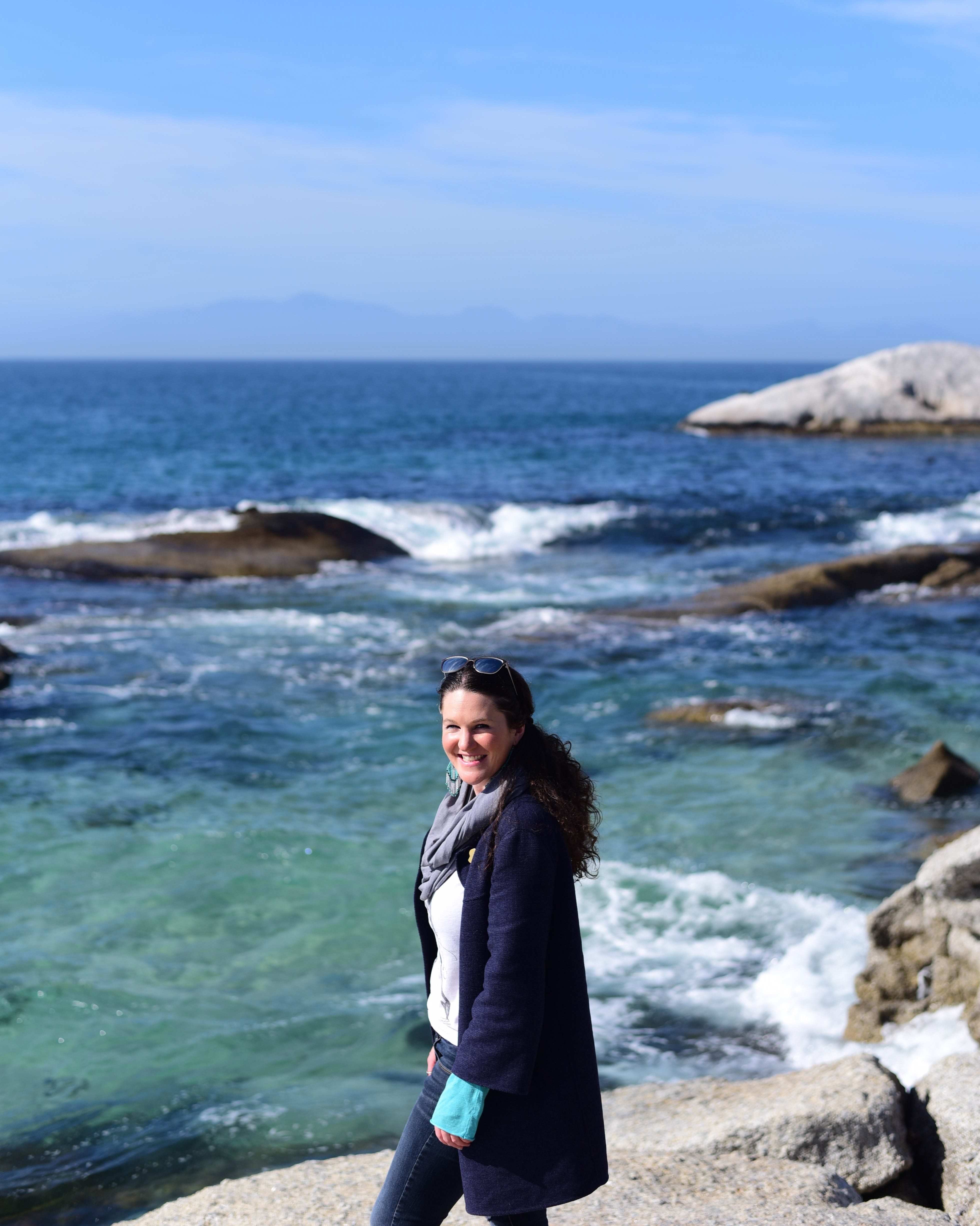 Allison Furniss is a Master of Philosophy candidate in the department of politics at the University of Cape Town and will be starting her PhD in early 2021. Allison is born and raised in northern Canada, having lived in Cape Town for the past three years. Allison’s graduate research focuses on the micro-politics of mining through a gendered lens, applying ethnographic research methods and feminist epistemologies to better understand the production chain of modern digital technologies. Previous to her graduate studies she lived in Tanzania and Namibia for 4 years working for sport for peacebuilding and social change non-profit organizations. Allison is passionate about social justice and was an active volunteer in politics and labour advocacy in her home territory of the Yukon before moving to Cape Town.
PrevNext
2,138 Responses